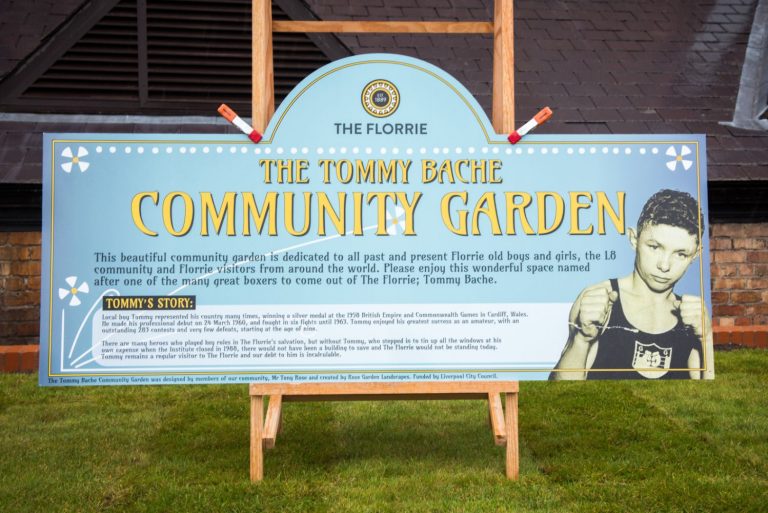 On Saturday we officially opened The Tommy Bache Community Garden, our new outdoor community space. Although the weather was against us everyone was in good spirits & we were joined by members of Tommy’s family & a few friends of The Florrie. It was a smaller event than we’d planned originally, due to coronavirus and social distancing restrictions, but we hope to host a larger event for the community when things have returned to normality. The good news is that the garden is now open for the community to enjoy during Florrie opening hours. It’s a lovely space to take a short break, especially for anyone who is currently stuck working from home, & in the future we will be hosting events & classes out on the lawn for everybody to get involved in. We are also looking for volunteer gardeners from our community to get involved looking after the garden so if you’re interested please get intouch on info@theflorrie.org or 0151 728 2323.

In attendance on the day was David Prentice from The Liverpool Echo who gave a fantastic speech which you can read in full below:

“You can tell Tommy Bache is a very important man.

He has his own Wikipedia page. I certainly haven’t.

It tells you he was born on September 13, 1938. That he is a male former boxer who represented England. (I’m not sure whether the male description was necessary. I don’t know too many female fighters called Tommy, but there you go)

And it says he won a silver medal at the 1958 British Empire and Commonwealth Games.

But there’s a lot, lot more to Tommy’s story than that.

And much of it revolves around this place – the much loved and famous Florence Institute – or to give it its proper name The Florrie!

Tommy was born and raised on Cockburn Street. Just round the corner.

He didn’t go to school and from an early age he started working for his father Tommy’s coal business. His father died when Tommy was a teenager so he had to grow up very quickly, he took over the family coal business and took care of his Mum Jessi four sisters and one brother.

He married his childhood sweetheart Marjory who was the one and only love of his life. They married in November 1958 and had three daughters Linda, Janet and Marjory.

Tommy was and still is a man of the Dingle. He didn’t want to live anywhere else.

He sold his coal business and moved into demolition, obviously still here in Liverpool, where his business became one of the biggest demolition firms in Merseyside.

He was part of the first self build scheme in Liverpool, helping build the site on Glendale Close.

But he did so much more.

He loved the Dingle and did plenty for his community, devoting his time and his own finances to help others. He would buy kits for the local football teams, donate and contribute to peoples weddings, funerals and charities. He donated land to a nursery so the kids had somewhere to play. He even built a house up for someone at his own cost.

A modest man, they are all acts he prepared to keep quiet.

But you couldn’t keep his boxing career quiet – because his talent demanded an audience.

Quite simply Tommy Bache is one of Liverpool’s great amateur Boxers. And let’s face it we’ve had a few from this city haven’t we?

He started Boxing at the age of nine. He wasn’t supposed to. He was too young to box but lied about his age so he could start Boxing and learnt his skills here at the Florrie.

He had great success as an amateur Boxer, he had 283 contests with very few defeats. He represented England, unbeaten in 30 contests. In one of his contests England fought Russia in an International match in Liverpool. Russia won 10-1 on the night. Tommy was the only Englishman victorious, knocking out his opponent.

Former Olympian Dick McTaggart once said after being hit by Tommy with a right hook he could still feel the ringing in his jaw many years later. And remember, Tommy was a Flyweight. He was so strong, he used to knock out Heavyweights with the power he had hence the nickname ‘The Demolition Man.’

Tommy won many titles as an amateur including a Silver Medal in the then British and Commonwealth Empire Games in 1958 in Cardiff. Tommy was chosen to represent his country in the 1960 Olympics in Rome, but decided to turn professional instead.

Tommy’s professional Boxing career was cut short in 1963 due to work and family commitments. But he was still undefeated in 6 professional fights.

So you thought only Floyd Mayweather, Joe Calzaghe and Rocky Marciano retired unbeaten as a pro. Think again!

Boxing Television Commentators Reg Gutteridge and Harry Carpenter used to call Tommy dirty knees Bache, because he used to get straight into the ring from a full days work covered in dirt and dust.

Although Tommy retired as a professional Boxer his love for the sport remained.

He had his own professional Boxing Gym on Mount Vernon Street, Bache’s Gym. The gym was above his Demolition business. Every great fighter at the time such as Olympic Bronze Medalist George Turpin, Joe Lally, Robbie Davies, Dave Davies, Carl Spear along with many others went to Bache’s Gym knowing they would be in for a hard night’s work, looking up at the towering steps to greeted by Joe Lynch, who worked for Tommy and looked after all the fighters in the gym.

In the seventies the United Services Social Club was home to the Golden Gloves Amateur Boxing Club on Admiral Street. They were looking for a new home. Tommy brought the Golden Gloves to his Gym and they remained there until their new home was completed.

The development ran out of money on completion. So Tommy donated the shortfall to complete the work. There’s a famous picture in the Liverpool Echo at the time of Tommy and another great Liverpool Boxer British and Commonwealth Champion Alan Rudkin MBE holding the Golden Glovers sign when the building was being demolished.

The Florrie has been a huge part of Tommys life from his early days as a Boxer, to his continued commitment to save and restore the building.

There are many heroes who played key roles in the building’s salvation, but without Tommy, who stepped in when the Institute closed in 1988 to tin the ground floor up, at his own expense, we wouldn’t have had a building to save

Even now in his later years, wind rain or shine he walks here every single day.

He’s made lots of memories there with friends along the way such as his good friend and sparring partner Billy Williams.

The Florrie truly is his holy place and his family are immensely proud and honoured to have the garden here celebrated in his name.

God Save The Florrie!

And God save Tommy Bache, the Demolition Man!”

Check out these great pictures from the event by John Johnson: